Detroit’s financial problems have gotten a lot of attention in the past few years, but there is another economic story unfolding in Michigan, Gov. Rick Snyder said. 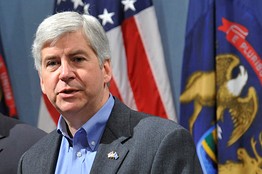 The state has become the high-tech hotbed of the Midwest, and has climbed from being 41st in the nation in terms of entrepreneurial activity and investing to the sixth-place spot in under a decade, the governor said.

“Michigan is very strong in life-sciences and IT [startups],” Gov. Snyder said, adding that universities like Wayne State, Michigan State and University of Michigan are producing promising new technologies, and that an investment ecosystem has sprung up around these schools and other areas rich in research and development.

The Michigan Venture Capital Association, in a recent survey of the state, said that the number of venture funds has grown 44% since 2009, with 33 venture funds, two corporate funds and two funds-of-funds active today.

Gov. Snyder said that, over that same period, the number of full-time investment professionals in the state has jumped by more than 80%.

In addition to several new firms opening their doors since 2009, firms with a national presence like Baird Capital and Cultivian Sandbox have opened offices in Michigan, the MVCA report said.

“A lot of our numbers are moving in the opposite direction of the national trend,” the governor said, referring to the thinning out of the venture industry nationwide.

Last year saw 50 funding rounds for venture- and angel-backed companies in Michigan, the highest number of deals since MVCA began tracking the data, the association said. Industry tracker Dow Jones VentureSource also tracks venture activity by state, and found that the total number of deals in Michigan last year was the highest since 1992.

VentureSource and the MVCA use different metrics when taking the pulse of the industry. MVCA said $120 million in venture rounds and $9.9 million in angel funding went into Michigan-based companies last year, making 2013 a record year.

Gov. Snyder has a particular interest in the venture-capital scene in Michigan. Before taking office in 2011, he had a long career in the business world that included co-founding two Michigan-based venture firms.

Though Gov. Snyder points to several strong universities and Detroit’s research-and-development infrastructure as strong drivers of investment activity in Michigan, he said government-level initiatives have also helped the state.

Gov. Snyder has created incentives to keep college graduates from relocating out of state, and helped establish matching programs for small businesses raising money, he said.